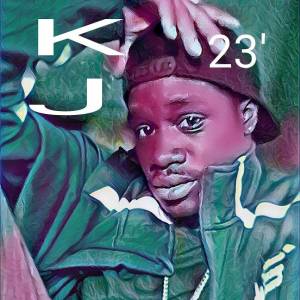 It’s not just about how to play, but how to feel.

His ice cream is melting, but he doesn’t care.

Guitarist and singer-songwriter Kerry James is feeling the music. And its message. That is, his message. So the sundae in a plastic dish, from the ice cream truck down the street, goes unheeded, turns slowly to soup.

He is his own ice cream. He’s his own rainbow sprinkles and whipped cream and fudge topping and cherry.

More than a man, more than a musician, he’s a living, breathing message, and a movement unto himself. A movement towards progress, hope, acceptance, love. Wrapped up in R&B and folk music. What the folk? Yes; a somewhat atypical genre for a young, gifted, black man in urban America—but Kerry James, aka, KJ, is nothing if not atypical.

He’s not angry, not bitter. That’s what compelled me to get behind him. He’s a miracle, he’s a genius. [We can] build a movement around him. He’s the American dream.

Kerry’s manager, Kyuntae Hunt Sauls (aka, Kash) the self-styled hip hop minister, is passionate in his believe of KJ. As one of the leaders of the Red Line Movement and brother/business partner for the Red Line Rapper, aka, SoLoW RedLine, Kash has seen a lot of musical acts over the years. And a lot of B.S., no doubt. But when he talks of Kerry, any patina of street hardness vanishes from his face. KJ has that effect on people; his guileless nature puts you at ease, and you let down your barriers, open up to him, and hear his music and his message.

“He’s so compelling as an individual,” says Kash. “So humble, but so confident.”

Kash laughs in agreement. “He’s so adamant, and persistent. Diligent!” And adds, with another laugh, “You never stop getting on people.”

For a man with a speech impediment, KJ speaks loud and clear.

I wanted to share my own story through my own emotions and my own pain. Not only be this miracle kid, and show that, Sure, I am disabled, but also show that a young adult like me can overcome any obstacle.

KJ, all of five foot two, bursting with energy, climbs up a ladder in the loft studio he’s come to visit and sits atop a ledge. From there, he holds court—half king, half joker, all jester, and a self-described nerd. (Just get him talking about his treasured Yu-Gi-Oh! cards.)

The adversity, from birth—health challenges, emotional challenges, along with bias for being a black man, for being homosexual, for being HIV-positive. And doubters, haters, questioning his heart, his talent, his ability to rise above.

Despite all that, his sunny, glass-half-full, irrepressible approach to life and his fellow humans is refreshing. In his 25 years, he has seen and felt a lot—things that might crush a weaker spirit, or turn it bitter, hard, cold. Dead. A victim of the streets, of violence, of prejudice, of hatred.

I want the whole world to hear me, and listen. I want to reach out to the heart.

Born in Chicago and raised in Gary, KJ was one of a set of triplets, alongside his twin sisters Kelly Jo and Crystal Nicole. Weighing in at birth just two pounds and seven ounces, Kerry has had to fight through health challenges throughout his life, including seizure, stroke, and respiratory failure at 5 ½ months old, which led to a long-term brain injury along with a speech impediment and stutter. He also faces learning and emotional disabilities.

Through it all, family is huge for KJ—especially his mother, Wendy. She bought him his first guitar—a Christmas present when he was 19. And, she’s the subject of “Mother and I”—a tribute to her.

A self-taught musician, Kerry learned to play guitar, sing, and write music on his own. Adversity is part of his art, too. “I started writing my own music and expressing own thoughts as to why father wasn’t in my life—why I had to grow up without a dad.”

I want to leave a legacy for the next generation.

For KJ, the message is never secondary to the music. He’s an advocate for the Aliveness Project of Northwest Indiana, which works to assist and empower individuals affected by HIV. And he’s an advocate for gay men—once he overcome his own fears of being ostracized. He feels like a representative of three different communities—the LGBTQ, disabled, and African-American communities.

But his primary community is the human community. He wants to use his music to help “anyone who is struggling with themselves—to make people open up and see who they are.” And, to stop the violence—his own brother, Robert, was murdered a few months ago, so KJ wears this mission close to his heart.

When they don’t talk about you, that’s when you start to worry.

KJ started building a name for himself in Gary, performing at city hall for the mayor, and hustling hard to participate in radio stations, blogs, open mics, and more.

He met his manager, Kash, through Facebook—well, actually, through food. Kash, who is also known as the hip hop chef, had just opened Green’s BBQ in Calumet City, and KJ kept liking his food via social media.

And not just likes, but real support. “He had brought words of encouragement to me,” Kash says. “He has a real supportive spirit. I was going through some tough times.

“I was trying to get myself back together spiritually,” he adds. “The music industry in Chicago is a drain.”

When he met KJ, he thought, “The universe is drawing us together.” Still, he adds, working with KJ as his manager was a significant step. “I had to pray on it, meditate about it.” But he realized it was meant to be—and he feels it, literally. “All his trials and tribulations of his life created the sound that only he can do. I hear it and feel vibrations through my body.”

I’m going to keep playing my song until the world hears it.

Back in the studio, Kerry performs “Mother and I” in front of a small crowd. His voice and guitar fill the room, along with a viola accompaniment. When the song ends, he bursts into a smile. As does everyone in the room. Anyone who has a mother.

The ice cream has melted.